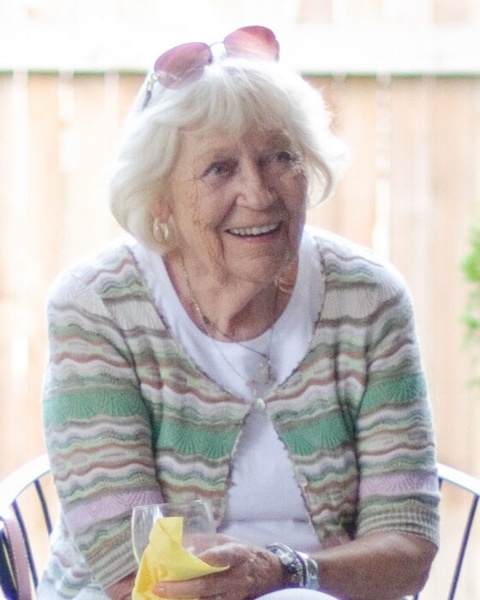 My Name is Lauson Kostka, Alice and Harold’s oldest. I want to thank you all for coming today to celebrate my mother’s life. But since she is the last family member of her generation I will try to celebrate all of them!

Mom was born July 24, 1927 at Home to Ira and Ann Walla, joining older brother Lauson. Grandpa was Post Master in Arnegard ND at the time. Arnegard was a small town of 150 or so people on the ND prairie. Grandparents on both sides lived within a block in either direction. Alice told me that when she started grade school she and her brother had 22 cousins in school with them. A four room school for grades 1 to 12. Mom’s only surviving cousin, Betty Kay, was like a sister. She lives in Oregon and they were in regular contact.

Grandpa Ira took a job with the IRS and the family moved to Fargo when Alice was 7, where she met her oldest and best friend Vange James. The 2 had talked by phone just 2 weeks ago. She attended Fargo Central High School. Always a good student she was a member of the National Honor Society and participated in theater, glee club, pep club and history club. She graduated in May 1945 just weeks after learning of the death of her brother In the Battle of Okinawa on April 28, 1945.

Lauson had been inducted into the Army in April of 1943 and was a Medical Aid Man (a Corpsman). He was awarded a Bronze Star for heroism during action on Leyte Island. His citation read “On Oct 26, 1944 when he was one of a volunteer unit which moved forward under heavy enemy small arms and mortar fire to evacuate and administer first aid to approximately 47 wounded men of a rifle company. PFC Walla’s untiring and courageous efforts were instrumental in saving many wounded men.” He was truly part of the Greatest Generation!

Mom attended North Dakota State University and joined a sorority and made more lifelong friends. She also joined the college theater group and in the summer of 1946 she toured with a summer stock group performing in North and South Dakota. In 1946 she met Harold Kostka who was attending NDSU as an engineering student and playing football.

They were married on May 29, 1948 and honeymooned driving Harold’s 1936 Ford Coupe to New Orleans. Later that year they moved to Inver Grove where they lived with Harold’s parents, John and Marie, sister Rose and her husband Mark, their infant daughter Maryann and Harold’s young brother Johnny. Quite the houseful!

With Grandpa John’s help, Harold and Mark opened Kostka Electric in the fall of 1948. In March of 1949 I (Lauson) was born and Harold and Alice move to their new home at 1100 Dayton Ave in St Paul Park. Alice made many new neighborhood friends including Audrey Fitzgerald, Patricia Katz, Grace Olson and Rosemary Swanlund. As with many of the post-World War II couples the family quickly became 4 little boys and outgrew the house. In 1956 they moved to the “House on the Hill”, a real farmhouse fixer upper. Alice then lived in constant construction, addition and renovation mode for the next 20 years. If this bothered her it never showed. The 4 boys were in heaven having their own woods to tramp in, build forts and generally be raucous boys. This good time didn’t come without an injury or two, and Alice was on a first name basis with Dr. Williams and his staff. She

was generally greeted during regular visits with “well Mrs. Kostka who is it this time?” One clear memory of mine, although she always denied it, was that when we would get under foot she would say “you boys get outside you’re making a mess”. This usually occurred right after breakfast regardless of rain, snow or temperature. With the kids attending St. Thomas grade school Alice made additional friends, Elsie Daggett, Pat Tinucci and Phyllis Begnaud. Harold also kept us “earning our keep” by teaching us to pound nails, weed gardens, pick apples, split firewood, on and on. All the things that kids of the 60’s and 70’s needed to know. His Saturday morning ritual of waking us to “Up and at’em, daylight in the swamp” usually meant we had some kind of project ahead. There are just too many great stories to relate here, but many of you here today were part of some of them.

In 1954 Grandma and Grandpa Walla moved down from Fargo. In 1958 Melissa joined us and Craig in 1960. The family was complete. There were many holiday get togethers with grandparents, uncles, aunts and cousins. They were either held on the hill or at Uncle Mark and Aunt Rose’s house, with generally around 20 to 25 people. The grandmas (who became good friends) would start the baking days ahead of time and there was always a big ham or turkey involved along with pies and cookies. The family traditions continued on and over the years as the family grew Alice introduced the Easter Egg Hunt for the grandkids. We would often find the colorful plastic eggs though out the summer. That tradition lasted until 2017 when she moved to White Pine Assisted Living.

There were lots of summer weekend trips to the Kostka cabin in Amery, WS where we swam constantly, fished and teased our cousins. Grandma Kostka’s kitchen at the welcomed everyone and there was a

constant stream of relatives and friends. In 1950 Harold bought a piece of land on Crystal Lake in northern MN and with Ira’s help built a small cabin. When that cabin was sold in 1975 we started looking for a new place. In 1978 we found another larger lot on Crystal Lake and began the process of building a new cabin. This required us to camp on the lot for the next 8 years. Not Alice’s favorite thing, but you’ll see pictures of her “roughing it” in the slide show.

Summer vacation driving trips somehow always include a stop in Arnegard where we would visit Alice’s grandma Betsy Walla (99) and Grandpa Bjornstad (101), aunts, uncles and some of those 22 cousins! On one of these trips while driving from Colorado Springs to Arnegard after getting on the road late and with a full station wagon, Harold was getting pretty tired and somewhere around 10pm in eastern Wyoming he decided that he needed to rest for a while. He pulled over to the side of the road and told us all to go to sleep. Somehow the car load got the giggles and couldn’t stop. Harold didn’t find this at all amusing, said a few choice words, put the car in gear and off we went arriving in Arnegard around 5am. I’m pretty sure he forgave us after a day or two.

We always had dogs. They were always hunting dogs. Jiggs was the first, he was my dad’s dog before he went in the service, and moved with us to St Paul Park. Duchess, Penny, Coco, Bo Jangles, and Rebel. And then there was Zonker! Alice’s dog, who’s hunting was mostly done in the kitchen. Dad didn’t see a lot of use for Zonker, but that didn’t stop him from buying Zonker his own hamburger when they were traveling on the road.

Mom and dad were left at home with an oversized, pretty quiet house when we were all on our own. So they down sized, by building a new house right next door. Now it was about Grandkids. The birthdays, holidays and just plain get togethers had special meaning. Pretty soon there were 13 grandchildren and they took pride in all their accomplishments, large and small.

Mom’s favorite pastimes were playing her piano, reading, sewing and entertaining. Her favorite music was 1940’s, especially Frank Sinatra. She was the MN Twins #1 fan and was happy when they began playing again in July. She loved being around people and if she couldn’t find a get together she’d start one. Now they had time to spend with friends and took advantage of it to travel, taking trips to Spain, the Caribbean, Canada, Mexico, Hawaii and Alaska. For a “prairie girl” who hadn’t left the Dakotas until she went on her honeymoon she certainly got around.

When Dad died in 1995, Mom was not alone. She leaned a little on each of us, but mostly she reached out to friends like Betty Kok and Jo Bailey. Her mother was still alive and became a focus of care. She kept busy, and started making yearly trips to Arnegard to visit friends and relatives, sometimes taking grandkids along. She caught up with her sorority sisters and 9 or 10 of them made yearly sojourns to senior hostels to reconnect and enjoy each other’s company. She made 3 trips with us to Costa Rica, including one in 2007 with Melissa and her family.

In 2004 she moved to her townhome in Hastings and made a bunch of new friends, inviting them over for a glass of wine or a beer. Dad told me once,”If you want to keep relationships alive you need to make

the effort”. He must have been watching Alice because she was the best example of this that I’ve ever seen.

I’m not sure there was anyone else quite like my mother, Alice. As soon as you met her you were her friend. She always looked for the best and brought out the best in people. As her health began to slip and you’d ask how she was doing the answer would be “I’m OK” or “it will be alright”. She was always a positive thinker always looking at the upside.

Mom always chose Love over hate, Joy and Happiness over sorrow and sadness. She knew that anger only punished the soul of the person who was angry. She forgave transgressions easily.

While maintaining social distancing guidelines, we are now able to accommodate gatherings while abiding to a 50% capacity at the facility. The use of face masks by attendees is required at indoor events, and we will continue taking the necessary steps to keep your families safe. Expressions of sympathy during this time can be left on the condolences page available on the obituary portion on our website. We also encourage you to view the video tribute once it becomes available or complete the HeartStrings online sympathy page with the link above.

To order memorial trees or send flowers to the family in memory of Alice Kostka, please visit our flower store.