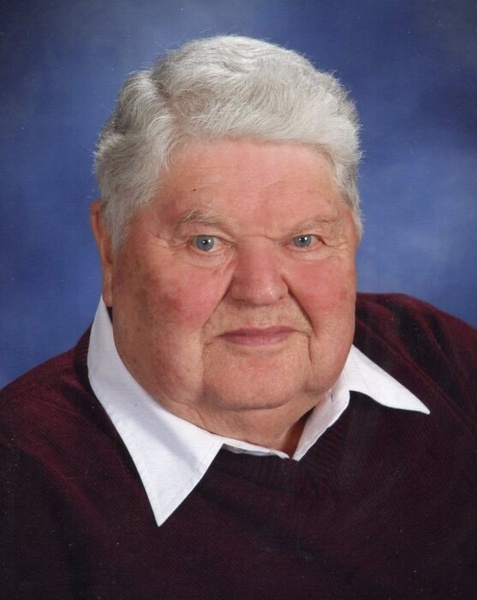 Bob Branchaud, age 97, of Cottage Grove, formerly of St. Paul, went home to be with the Lord on Thursday, September 16, 2021. Preceded in death by wife of 56 years, Joyce. Survived by daughters, Kate Jones and Carol (Bruce) Fox; four grandchildren; ten-great grandchildren; and other loving family and friends.

In lieu of flowers, the family is collecting donations for the Chamber of Commerce Christmas Food Shelf Train.

He grew up in Brainerd. He was raised by Ellen and Frank Branchaud. His nickname was Moe from his

high school days. His buddies were Larry and Curly, making up the “Three Stooges”.

Bob seems to have been raised with a loose hand as he told many stories of campouts with friends,

especially Pete Humphrey, and of collecting metal from the junkyard to raise a nickel to go to the movies.

His favorites were Tom Mix and other cowboy shows, and The Three Stooges or Tarzan continuing

episodes. Many times the neighborhood boys played marbles or they played cowboys or gangsters in a

rusted out shell of a Ford car. Football, baseball and hockey were some of the sports he enjoyed. He’s

pictured in the high school yearbook throwing the discus. Marv’s Aces was the name of the summer

baseball league team he played for. Pal, his dog, was his companion. His cat was Fluffy. Pal was

supposed to be a water-loving dog but didn’t like water one bit. Bob earned the rank of Life Scout from

the Boy Scouts but couldn’t make Eagle Scout because he didn’t pass the lifesaving requirement. He once

bought a pair of tennis shoes at O’Brien’s Department Store and got a free turtle. He had to keep it alive

until the turtle races that happened before school started. The turtle only stayed in the center circle and

There was always a batch of beer brewing at home in either a 50 or 30 gallon crock. It was bottled in

quart bottles a week after it was set to brew. Bob’s job was to add a teaspoon of sugar and ½ teaspoon of

salt to each bottle. Many times Frank and Ellen would entertain to play cards and drink their homemade

beer. Once in a while they would take Bob with them to a friend’s, Joe Girard’s home in St. Mathias for

dancing. The family would roll up the rug to create a dance floor. He remembered that one of the cousins,

Albert Dechaine, played the fiddle, and that they had an Aladdin’s lamp for light.

Church, and learned his Catechism from Father Hogan who called the kids “cabbage heads”. His 9th

grade was spent at Franklin Junior High. According to school records, Bob was moved ahead of his

classmates by two grades, which allowed him to graduate from Washington High School at the age of 16

Shop, or caddying at Madden’s Pine Beach Resort golf courses on Gull Lake. He and his buddies rode a

holes. On 8 Sept 1941, he began working for the Western Union Telegraph Company in Brainerd, MN as

a student operator and deliveryman for 30 cents an hour. He taught himself Morse Code while he was

working there and also on the job in Bismarck, ND. He practiced copying the other operators until he

learned to telegraph proficiently. His handle was RO. While working a shift on Mother’s Day in Brainerd

in 1942, he received the telegram notifying his family that his uncle, Fred Branchaud, had been captured

by the Japanese and was now a POW. The telegram is still in his possession. The Western Union had an

messages. From Huron he was transferred to Bismarck, ND.

Bob’s military service began with a draft notice and induction in 1942. He was processed through Fort

Snelling in St. Paul, MN. He became part of the Army Air Force and went for basic training in Biloxi,

MS. He was next sent to Sioux Falls, SD for radio school because of his Western Union background. He

outdoors. It was there the Army decided he and others were to have their tonsils out. The men were lined

up on gurneys, given a shot in each tonsil, and a shot to put them to sleep while the doctor cut out their

tonsils. Recovery took 6 weeks. Gunnery school was the next post in Yuma, AZ, where he became a crack

shot. “We shot everything we should and some we shouldn’t,” he said, including his 50 out of 50 targets

from a moving truck with a 12 gauge shotgun. Later in life he would become a member of trap and skeet

shooting teams with a record for accuracy, shooting 100 out of 100 in skeet. From Yuma he went to

Instructor School in Laredo, TX. He and a fellow GI took a side trip on a pass to Nuevo Laredo, Mexico

to the longest bar in the world, not his first taste of tequila however. Although he could have been

assigned as a radioman in a B17, he was stationed stateside and did not see combat. Most of his service

consisted of teletype and typing instructor in Oklahoma City, OK. He also taught gunnery school. In

1945, on a transfer to North Carolina, the baggage car of the troop train he was on caught on fire and they

lost all their gear. Approximately 5000 additional men had also been transferred to North Carolina for

reassignment and were most likely on their way overseas. Instead, he was sent to Jefferson Barracks, MO

where he learned how to fill out paperwork for the GIs being discharged into civilian life. He was

discharged 12 Feb 1946 as a corporal and went home to Brainerd.

Before going back to Bismarck, ND, his last station before the war, his grandfather passed away. He was

allowed to spend an extra 2-3 weeks in Brainerd to attend the funeral and to his grandmother’s needs.

Bob continued his employment with the Western Union Telegraph Company, being posted in various

towns in North and South Dakota. His final position with the Western Union was in Aberdeen, SD as a

telegrapher in November 1946. A large part of the telegraph business came from pheasant hunters

sending telegrams for hotel reservations. Many dignitaries hunted in Aberdeen including Clark Gable,

who sent a message that was received by Bob. Part of Bob’s duties included telegraphing baseball games

in 1947 for the Aberdeen Pheasants, whose parent division was the St. Louis Browns major league team.

team’s press box. The message would then be handed to the radio announcer who added sound effects and

commentary, making it sound like the game was in real time.

While in Aberdeen SD, he met and married Joyce Louise Sievert who was also working for the Western

Union. Bob recalled kissing Joyce in the walk-in safe a time or two. They were married at Sacred Heart

Catholic Church 22 June 1949. They made their home at 806 N Arch Street, in a basement house with an

entrance above ground. Their plan was to add the main level at some time in the future. Joyce grew up in

Florence, SD on a farm with seven sisters and two brothers. Her father, Frank David Sievert, died when

she was nine, leaving her mother, Clara Beyer Sievert, and family to manage on their own. She attended

teletype school in Crawsfordsville, IN before going to work at the Western Union office in Aberdeen, SD.

Bob, Joyce and their new daughter, Kathryn moved to St. Paul, MN in 1951 when Bob took a job with the

Great Northern Railway Company as a Morse operator. He was assigned to the relay office to telegraph

any messages pertaining to the railroad. He later bid on a job to work in a new department known as the

car bureau. He saw many changes in communication systems through the years from telegraph to teletype

to computers. He was promoted to Supervisor, Data Control 1961. His job was to ensure that train and

engine reporting was timely and accurate. He was instrumental in computerizing the rail yards from

Chicago to Seattle and Portland. When he retired in 1981, his title was Assistant Director of

Transportation, Technical Services for the Burlington Northern Railroad; a merger of several railroads.

Their first home in St. Paul was located at 1908 Roblyn Ave, where they welcomed their daughter Carol.

Around 1954 they purchased a larger home at 1900 Roblyn Ave where they lived for the next 20 years.

They were members of St. Mark’s Catholic Church. In 1974 they sold that home and moved to the suburb

of Cottage Grove, MN at 8322 Iverson Court. They became members of St. Rita’s Catholic Church in

Cottage Grove, where they volunteered in the office and with the Men’s Club. When Joyce passed away

in 2005, Bob moved into a senior apartment in the Norris Square complex of Presbyterian Homes in

Music held a special place for Bob his entire life. He was self-taught on the banjo, ukulele, mandolin,

guitar and harmonica. At one time he owned an accordion and an electric keyboard, and was proud to

own a homemade stomp stick. He liked to play unusual instruments like the kazoo, the spoons, and the

washboard. His favorite way to pass time while driving was to teach his daughters some of the many

could get him to pick up an instrument and play or just sing along. All his nieces and nephews couldn’t

wait to see what Uncle Bob was going to do or play next.

As a boy he hunted rabbits and squirrels and fished in the Brainerd Lakes area. Later he hunted pheasants

and fished in South Dakota. Often he fished the Canadian waters with his son-in-law. Around the mid

1960’s he went to television and radio repair school at the vocational school in St. Paul. He was self taught

in carpentry and home remodeling, refinishing woodwork and furniture, and wallpapering. Other

pastimes were camping with his family, coin collecting, photography, collecting telegraph and railroad

There was always interest in preserving the Morse Telegraph Code. Bob was president of the Minnesota

Morse Telegraph Club from 1968 on; over 50 years. Each year he and Joyce would organize the banquet

to celebrate Samuel Morse’s birthday in April, and the annual summer picnic in August. Many times he

would drive to Northfield, MN for Jesse James Days and set up equipment for people to send a message

from one end of town to the other. He was also instrumental in setting up the displays at the St. Paul

Union Depot Museum and donated several items from his collection of telegraph keys, sounders and

railroad memorabilia. He was recognized in the 2018-19 winter issue of Dots and Dashes magazine for

After retiring in 1981, Bob began a career of volunteering and part-time jobs. Some of them included

treasurer of the Cottage Grove Senior Center, Chamber of Commerce, and Stone Soup. He was heavily

Minister, and weekly data entry. After moving into the apartment at Norris Square, he became involved

with the liturgy committee, a cribbage group and a bridge group. He organized a Monday night “picnic”

in the lounge for his new friends, and promoted a Wednesday night sing-along for any and all to enjoy.

Other organization and clubs he was a long-time member of include: American Legion which he joined in

To promote Cottage Grove and the impact of the railroad, Bob and the Chamber of Commerce pursued a

stopover by the Canadian Pacific Christmas Train. The train collects food shelf donations along its trek

from Toronto, down the East Coast and through Midwest to Vancouver, BC. Cottage Grove is known as

the stop with the highest volume of food and cash donations.

Always innovative and interested in what’s new, he studied technology and computers, and collected

To order memorial trees or send flowers to the family in memory of Bob Branchaud, please visit our flower store.