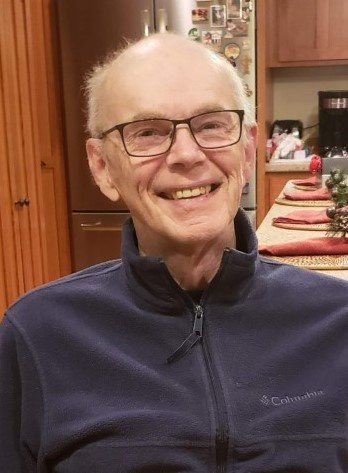 Charles “Chuck” Duede, age 77, of Cottage Grove, passed away while surrounded by loving family on Tuesday, September 28, 2021 after a four-year battle with cancer.

Chuck was born on December 21st, 1943 in Minneapolis, MN. Chuck and his older brother Dave were raised by their mother, Gladys, and maternal grandparents, Herman & Clara. He grew up in South Minneapolis in a home built by his grandpa. After graduating from Roosevelt High School in 1961, he attended and graduated from the U of MN. In 1969, Chuck married Joyce. They celebrated their 52nd anniversary on September 19th, just prior to his passing. Their house in Cottage Grove has been home for the last 50 years. It was here that they raised their two children, Ali (1975) and Dave (1978).

Chuck was a hard worker who rarely missed a day of work in his 30+ years as a Systems Analyst for West Publishing. However, his number one priority was always his family. He loved and supported them in numerous ways, even if it meant sacrificing his own time or interests. Chuck organized countless trips to take with Joyce, his kids, grandkids, and friends, many of which included camping and backpacking so he could share his love of the great outdoors with them. He also made it a priority to take good care of himself and shared his love of exercise through running, hiking, biking, and canoeing. Above all was his love of cross country skiing, which he discovered in his early 30’s, and continued throughout his life. In fact, just this year he celebrated the completion of his 20th American Birkebeiner.

After retirement, Chuck and Joyce enjoyed taking many trips together with their close friends, Jerry & Joan Jacobsen, with whom they traveled the world. They took 18 trips in all, including cruises, cross country ski trips and tours. Their first adventure found them in Ocean Springs, Mississippi, working with a church group to rebuild homes after Hurricane Katrina. Upon returning, Chuck worked with Dave to fix up his starter home, including the replication of a beautiful front porch railing that caught his eye while down there. Having always had a love for woodworking, he also took up making stained glass windows and doing millwork projects in his own home over recent years.

Chuck was a creative, kind, thoughtful, family oriented man with an infectious smile and amazing sense of humor that will be greatly missed by all.

The family thanks AccentCare Fairview for their loving care.

LIVESTREAM INFORMATION:  For those who would like to participate in Chuck's service via livestream, you can watch the service on Thursday, October 7, 2021 at 10:50 AM.  It can be viewed by scrolling to the bottom of this page, and "CLICK PLAY" to begin.  Please leave a message of support on our Tribute Wall to let the family know you were able to watch the service.  If you are having troubles with the Livestream, the service will be available to watch later in the day.

To order memorial trees or send flowers to the family in memory of Charles "Chuck" Duede, please visit our flower store.