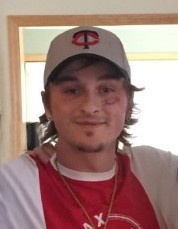 Daniel Placzek died unexpectedly in Regions Hospital on March 29, 2020 in St. Paul, MN; he was only 21 years old.

Daniel is survived by his parents, Steve and Tammy (Christiansen) Placzek; his brother Andrew; his sister Anja; grandparents Gary and Marilyn Christiansen and Jerry and Diane Placzek; and uncles Jason Christiansen (Soua), Don Placzek (Gail), and Mike Placzek (Laura).  Daniel is preceded in death by his cousin, Mitch Morton.

Daniel was born on May 23, 1998 in Moscow, Russia.  He and his brother, Andrew, spent 15 months in an orphanage in Pereslavl, Russia until, in July 2003, God created a new family for them with Steve and Tammy.  Daniel grew up in Cottage Grove, MN and, after graduating from Park High School, moved into an apartment in St. Paul Park, MN with his brother and two friends.  For the past year, Daniel worked for Smith Cole Stucco & Stone as a tender.

Daniel always loved to be outdoors – as a kid, he would ride his bike around the neighborhood (with his younger brother following close behind) making friends with kids who lived nearby.  Camping trips with family and fishing with his friends were two of his favorite things to do.  Daniel was fiercely loyal and protective of his family and close friends.  Though he put up a tough exterior to protect himself from the world, Daniel had a kind heart.  He especially adored his little sister, Anja, and even had her name tattooed on his wrist.  Everyone who knew him will remember that when Daniel was excited, he could light up an entire room with his incredible energy.

Despite being surrounded by caring family and friends, life was a struggle for Daniel.  The trauma he suffered as a very young child left emotional scars that could not be easily healed, and a mind and body constantly in a state of high stress.  Those whom he has left behind are clinging tightly to the hope that, by the grace of God, Daniel has finally found peace.

Private services will be held but a Celebration of Daniel’s Life will be announced at a later date.  In lieu of flowers, memorials may be directed to The Union Gospel Mission – Twin Cities.

To protect the health and safety of all, services are currently being limited as required by state and local authorities and the CDC. Expressions of sympathy during this time can be left on the Tribute Wall available with the obituary on our website. We also encourage you to view the video tribute once it comes available. Check the our website for the latest COVID-19 update.

To order memorial trees or send flowers to the family in memory of Daniel Placzek, please visit our flower store.