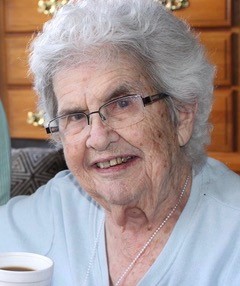 Dorothy Graber, age 91 of Woodbury, passed away peacefully on October 13, 2022 at the Woodbury Estates in Woodbury.

Dorothy Catherine Webb was born in Fremont, Nebraska on March 9, 1931. She was the daughter of Henry LeVan and Maude Holcomb Webb. She lived in Fremont with her 2 brothers and four sisters until graduating from high school. She was introduced to Jesus by her brother, Joe, and accepted Him as her personal Savior in high school. She attended Northwestern College in Minneapolis, MN against her parents' wishes. Because it was faith-based, her father would not help with tuition, so she worked her way through college, often studying late into the night because of the long hours of work. Her cousin was supposed to attend with her, but backed out last minute so she went alone.

She met her husband of 63 years at Northwestern College. Dale Graber felt called to missions, so not long after their first child was born (Lynne), they joined Sudan Interior Mission and went to ELWA radio station in Liberia, Africa. Lois and Larry were born in Liberia during the 10 years they were there. Mom worked a few jobs at the radio station but really enjoyed the correspondence area of the radio station, answering letters from listeners. The radio not only broadcasted Christian radio, but also news of the world to Africans that had never heard any outside of their local villages. They moved back to Bridgewater, SD in 1967 where Mom became the office manager for Dad's plumbing and heating business.

In 1977, they moved to Clearwater, KS for Dad's roofing business and Mom became the office manager for the local nursing home until retirement. In her retirement years she enjoyed walking each day with a friend and working as a clerk in the local library, a job she especially loved because she was a voracious reader.

She and Dad moved to Parker, SD in 2007 to be nearer to family. They moved to Woodbury in 2017 and dad died the following year.

Our mom's life was marked by hard work and love for God and her family. She taught Bible studies, led mission teams and volunteered to bake, clean and do whatever her church asked of her. She rose daily to read her Bible and pray for her family, her church family and missionaries around the world.

We are grateful for her life and her example. We are blessed to call her our mom.

To order memorial trees or send flowers to the family in memory of Dorothy Graber, please visit our flower store.