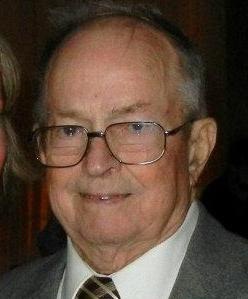 Eugene L. (Gene) Raeker, 89, died April 14 at Region’s Hospital with his family at his side.

Gene was born Aug. 25, 1929, in Freeport, MN, to Ben and Helen (Rolfes) Raeker. He was preceded in death by his parents, his brothers (Art, Bernie, Curly, Ed, Paul) and his sisters (Marian, Vera) and two siblings - Norbert and Catherine - who died in infancy.

A graduate of Melrose High School and a veteran of the Korean Conflict, Gene served in the U.S. Army. After service in California, he returned to Freeport to start his career and raise his family. He worked at Freeport State Bank for many years, then sold insurance for the Catholic Aid before opening his own insurance office in Little Falls.

He was a steward of the land and put that into practice at his beloved “ranch” near Burtrum, MN. He enjoyed spending time with family and fishing. Gene was a genuine do-it-yourselfer — he made wine and maple syrup, gardened and raised chickens.

He also found it difficult to pass up a good sale at Menards.

To order memorial trees or send flowers to the family in memory of Eugene Raeker, please visit our flower store.