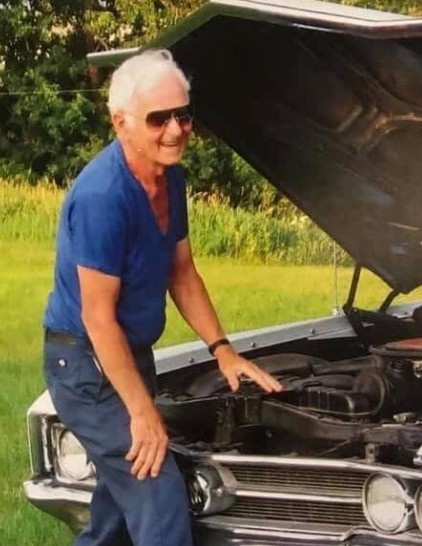 Funeral service will be 11 am, Wednesday, January 19, 2022 at Kok Funeral Home, 7676 80th Street S., Cottage Grove with visitation one hour before.  Burial will take place at St. John’s Lutheran Cemetery in Woodbury at a later date.

Eugene was born at home in Cottage Grove on March 30, 1932 to Henry and Martha Pommerening.  After completing his education at Park High School, he was drafted into the US Army and was stationed on the coast of Newfoundland.  Gene, as he was known by many, was introduced to Leida Pechuman on a blind date and they were later married on his birthday, March 30, 1957.  They lived in Cottage Grove near the original family farm and enjoyed many years together raising their children.

Gene worked as the lead bus mechanic for District 833 for many years and finished his career as a machinist for Motor Parts in South St. Paul.  Gene had a knack for fixing cars and through the years many people knew that his garage was always open for a repair or sitting back for a visit or sharing a beer.  He enjoyed his “toys”, which included snowmobiles, 4 wheelers, motorcycles and Oldsmobiles.  He had a small collection of tractors, but not just any tractor… it had to be a Farmall!

Although he was quiet by nature, he loved being in the mix of people and spending time surrounded by his family.

Gene is survived by his wife of 64 years, Leida; children, Vince (Mary), Todd and Connie; grandchildren, Nicole, Donovan, Samantha and Sydney; great-grandchildren Nora Gene and one on the way; as well as three sisters-in-law and numerous nieces and nephews.  He is preceded in death by his son Donovan; parents Henry and Martha; brothers Henry, Lowell, Robert and Arnold.

LIVESTREAM INFORMATION:  For those who would like to participate in Gene’s service via livestream, you can watch the service on Wednesday, January 19, 2022 at 11:00 am.  It can be viewed by scrolling to the bottom of this page, and "CLICK PLAY" to begin.  Please leave a message of support on our Tribute Wall to let the family know you were able to watch the service.  If you are having troubles with the Livestream, the service will be available to watch later in the day.

To order memorial trees or send flowers to the family in memory of Eugene "Gene" Pommerening, please visit our flower store.

Burial at a later date