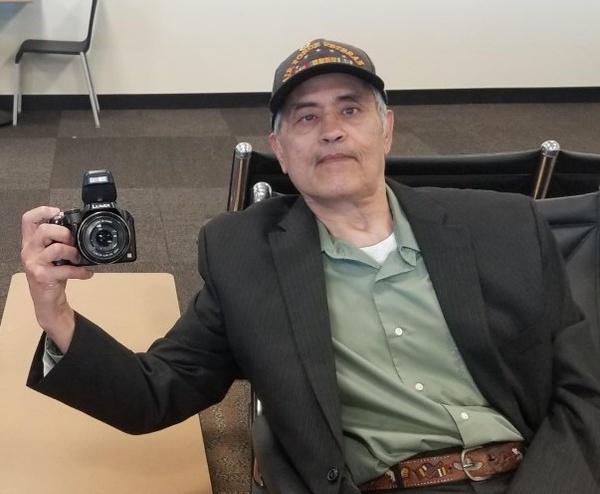 He completed of basic training at Lackland AFB San Antonio, Texas and was sent to Lowry AFB in Denver, Colorado for Fire Control Systems training on the F106 fighter/interceptor.

Upon completion of training in 1966 Mr. Chavez was assigned to the 318th FIS at McChord AFB, Washington.

When North Korea took the US Naval Ship Pueblo in 1968, Mr. Chavez deployed to Osan AFB, South Korea with the 318th Squadron. The ship was returned and the 318th came back to McChord.

Mr. Chavez was honorably discharged from the USAF on Dec 6, 1968.

The F106 (459) that is on display at the McChord Museum happens to be one of the aircraft that Mr. Chavez did maintenance on during his enlistment.

It is also kind of ironic that Mr. Chavez was a member of the 318th FIS Green Dragons at McChord in 1966 and his daughter Yvonne was the Battalion Commander of the 504th Dragon Fighters at JBLM 50 years later.

One of George’s passions was photography. He absolutely loved taking pictures of the Park Athletics.

He is preceded in death by his father, George Chavez; grandmother, Ezequila Hernandez.

To order memorial trees or send flowers to the family in memory of George Chavez Jr., please visit our flower store.

Services to be announced at a later date