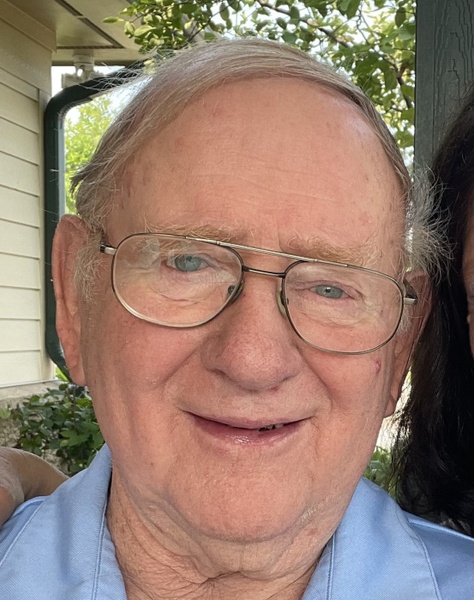 James "Jim" Louis Morris, (also referred to as Dad and grandpa Jim) will be remembered as a servant to God and to all who were blessed to have crossed paths with him.  He was born on July 5th, 1934, to Donald and Marian Morris in St. Paul, MN and passed away on June 22, 2022, and has left this Earth knowing he was going to go be with God, the One he served for almost nine decades.  When looking at the dates of Jim’s birth and the date of his death; it is the dash in between the two dates that holds the story of an incredible man. Jim grew up with 3 brothers, Gene, Bob, and Dick.  He graduated from Johnson High School in 1952 and during that time in school he enjoyed football, baseball, and basketball.  He married Audrey Crotty (Morris) in 1956; together they created a beautiful family of five kids, Dan, Tim (Suzanne), Julie, Kathy (Gerry), and Lisa (Sean).  Later in life, he and Audrey were blessed with grandchildren and great grandchildren, a lot of them; 17 grandchildren, and 20 great-grandchildren to be exact and boy did they bring an added joy to his life!  As a husband, dad, and grandpa, he taught his family how important it was to put God and others first.  Later in life, after Audrey had passed away in 2009, he then re-married to Cheryl in 2014, where he was again blessed with 6 more stepchildren Alana, Todd (Christi), Mike (Tara), JoDell (Cheri), Jennifer (Jeremy), Bethany (Shane), 24 step-grandchildren, 10 step-great grandchildren and their families.

His strongest traits that he passed down to his children and grandchildren are, keep your faith in God; he will answer your prayers.  Love one another and treat others the way you would want to be treated.  Be kind and giving, help others in need and do not walk past someone who is in need (he demonstrated this to so many of his family and friends who were in hard times).  Jim’s inner and outer strength were like no other, he was one tough guy.  He was a very loving and talented man who devoted his life to helping anyone in need.  God and his faith, family and friends were his top priority, but he always had time to take on another project for a complete stranger as well.  He would donate his time, money, and talents to several organizations: his Church community, choir, Bible study, camps, and the Habitat for Humanity.  Jim always made time for his family and never missed a get-together or holiday.  He enjoyed reading; his library was quite extensive at one time.  He would spend hours playing cards and board games with his kids and grandkids.  He loved watching sports, he was sometimes better than the commentator on the TV when watching golf, football, or baseball with him.  His career was in sales, but his passion was centered on carpentry and woodworking.  Anyone that has received any of his work knows that the finished product he was able to produce in his garage or on site by hand, was far greater in quality and value than anything you could buy in a store.  His craftsmanship can be seen all over Minnesota and Wisconsin; inside homes, churches, resorts and businesses.  He was also passionate about teaching others the craft of carpentry, some of his children and grandchildren have made careers in construction and woodworking because of him.  Through their work his legacy will live on.

Jim lived a long and joyful life; he blessed this world with his kindness, knowledge and craftmanship.  The dash in-between his birth and death will not be forgotten by his family and his friends, he touched the world in so many ways.  Jim Morris passed away peacefully with family by his side, knowing that through his children and grandchildren, they will continue to lend a hand to those in need and always to those in need of a prayer.  Think of Jim every time you swing a hammer, especially when you hit the wrong nail, or your finger; his memories will surely ease your pain and put a smile on your face.

A funeral service will be held at Valley Baptist Church (860 St Croix Trail S, Lakeland, MN) on Wednesday, June 29, 2022, at 11am, with visitation beginning at 9am. Jim will be laid to rest at Forest Lawn Memorial Park.

LIVESTREAM INFORMATION:  For those who would like to participate in Jim's service via livestream, you can watch the service on Wednesday, June 29, 2022 at 11:00 am.  It can be viewed by scrolling to the bottom of this page, and "CLICK PLAY" to begin.  Please leave a message of support on our Tribute Wall to let the family know you were able to watch the service.  If you are having troubles with the livestream, the service will be available to watch later in the day.

To order memorial trees or send flowers to the family in memory of James "Jim" Morris, please visit our flower store.