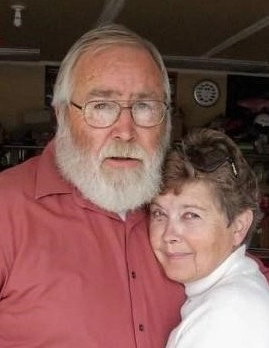 Stephen Francis Griffin, a longtime resident of Newport and St. Paul Park, passed away unexpectedly on May 1, 2022, at the age of 80. Stephen Francis Griffin was born January 30, 1942 in Montevideo, Minnesota to John and Evelyn (Kelley) Griffin. He grew up in St Paul Park and graduated from Park in 1960. Steve and Janice Peterson started dating in 1963 and they were married two years later at Newport Lutheran Church. They lived in the St. Paul area for several years before moving into the home that they built in Newport in 1976. Steve worked as a commercial truck driver for Excelsior Heater Supply for over 30 years. Steve and Jan loved to travel across the country via motorcycle or RV to visit family and made many friends along the way. Steve’s passion was dirt track racing.  He started early on as part of a crew and then began driving on his own later.  Even after he was done driving you could still always find him at the racetrack. Steve was a devoted father who loved to invest in his boys and received a lot of joy supporting them in everything that they did. As a grandpa “Papa” he loved spending time with Brianna.

Steve is survived by his sons Robert (Tom Thorpe) and Roger, granddaughter Brianna and Sister Jane as well as extended family. He is preceded by his wife Janice, parents, John and Evelyn Griffin, siblings Molly and Jack.

LIVESTREAM INFORMATION:  For those who would like to participate in Steve's service via livestream, you can watch the service on Tuesday, June 7, 2022 at 7:00 pm.  It can be viewed by scrolling to the bottom of this page, and "CLICK PLAY" to begin.  Please leave a message of support on our Tribute Wall to let the family know you were able to watch the service.  If you are having troubles with the Livestream, please accept our apologies, but the service will be available to watch later in the day.

To order memorial trees or send flowers to the family in memory of Stephen Griffin, please visit our flower store.