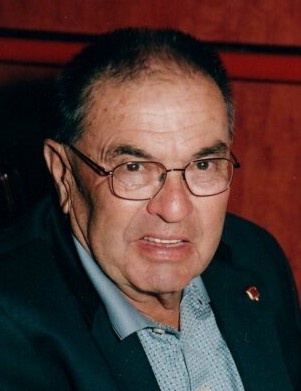 Tommy was born in Minneapolis MN on April 2, 1927, to parents Edwin and Genevieve (nee LaVigne) Thompson as the second of 3 children.

Always ambitious, Tommy’s first job as a child was delivering the paper, getting up early before school to follow his older brother Bruce around on his route.

As he got older, he spent many hours hanging out at Camden pool, where the lifeguards taught him how to dive.  He was an avid student and was elected captain of the Minneapolis Edison High School swimming team, a post he held for 3 years.

After graduating from Edison High in 1945, his plans to enter the University of MN were thwarted by WW II.  Instead, he enlisted in the US Coast Guard and was appointed swimming instructor.

Following his discharge, he entered the U of M. earning his Master’s degree in education An accomplished athlete, he was a key member of the University Diving Team, and later honored in their hall of fame.

In 1948 he won the National YMCA competitive swimming and diving championship for low board diving, breaking the previous record.

For a time he worked as a counselor at the Vincent A. Day center for children, as well as a lifeguard at Lakes Calhoun and Theodore Wirth.

It was there that he met the love of his life Joan (nee Starkey).  As he later recalled, his first impression meeting her was WOW!  They married on March 19, 1949 and started raising a family.  In 1951 he began his teaching career in the St. Paul school system, one which was to last 31 years, working with kids of all different ages.

Tommy always loved the bright lights of show biz; and having summers off from teaching allowed him the freedom to pursue his dream of working in the field.

From 1948-1955 he performed with the Minneapolis Aqua Follies at Theodore Wirth as  part of their comedy diving team, while his sister Jean performed with the Aqua Dears.  He recalled those days fondly, some of his memories included diving from a 100 ft tower into the lake filled with snapping turtles.  For a glimpse into this era view the documentary Lost Twin Cities. https://www.pbs.org/video/tpt-documentaries-lost-twin-cities-iii/

As their family grew, he expanded his repertoire by creating a comedy routine for the trampoline and a tumbling act called “Tommy and his Girls”. He and his family would spend the summer months touring the upper midwest in their wood paneled station wagon with a mattress in the back for the kids, performing with other vaudeville acts at county fairs and other venues.

In later years he dedicated himself to his work with troubled boys in the juvenile justice and recovery system.

After retirement, he and Joan spent the winter months in Mesa, Arizona where he “left his mark” by establishing a baseball field, aptly named Tommy Thompson’s Field of Dreams. He was an avid cyclist and talented ball player who participated in a world championship and played well into his 80s.

Tommy will always be remembered for his drive and determination to be the best as well as his ever present sense of humor. (He once rented a gorilla costume to cheer up his son.)

Survived by daughters Linda Skinaway, Laura (Jerry Juvrud) Thompson; Wendy (Neil) Ganther, son Tommy Jr., son-in-law Thomas Kirchner; He was the beloved grandfather of Seth, Laell (Josh), Jodi (Paul), Jamie, Brett (Andrea), Scott (Jolynn), Matt and Trevor; 10 great grandchildren in addition to 6 nieces and nephews.  Tommy was a friend of Bill W as well as many in the AA community.  In 2018 he was presented with a 50-year pin, an achievement he took great pride in.

The family would like to thank the staff at Hometown Senior Living for their compassionate care and Darlene for her friendship during the last years of his life.

Memorial service to be determined at a later date. He and Joan will be laid to rest at Ft. Snelling National Cemetery. Memorials may be directed to the Alzheimer’s Association ( alz.org ) or Alcoholics Anonymous ( aa.org ).

To protect the health and safety of all, services are currently being limited as required by state and local authorities and the CDC. Expressions of sympathy during this time can be left on the condolences page available on the obituary portion on our website. We also encourage you to view the video tribute once it becomes available or complete the HeartStrings online sympathy page with the link above. Check the funeral home website for the latest COVID-19 update or changes to the service schedule.

To order memorial trees or send flowers to the family in memory of Thomas "Tommy" Thompson, please visit our flower store.