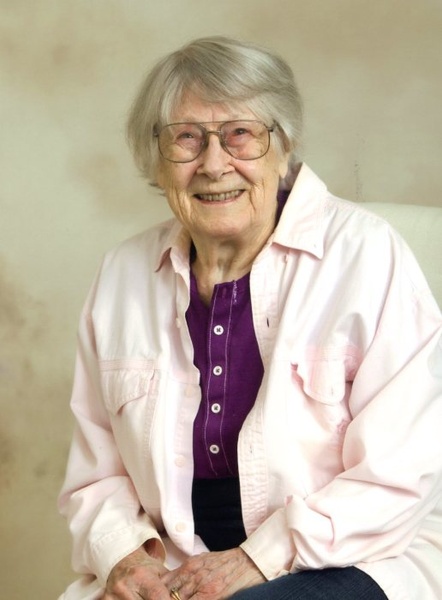 Veronica, or Vee, was born at home in Traverse County near Wheaton, MN, on 12/31/1918.  She grew up surrounded by her brothers, playing outdoors, and taking care of the younger siblings.  She liked playing softball and was proud of the fact that she and some of the other girls could outplay the boys at recess.  She graduated from school after 8 th grade and stayed home to help on the farm and with her siblings.  Later, she moved to Minneapolis, graduated from Cosmetology school, found work, and met Arthur Monroe Olsen, otherwise known as Bud.  They met on a blind double date, although they weren’t each other’s date!  They married on 9/14/1942.  A son, Dick, and a daughter, Jeannie, made their family complete.  Bud passed away far too early at the age of 53, in 1970, and Vee has been on her own ever since.  Her son Dick also passed far too early at the age of 38 in 1982.  In 1998, she moved from Minneapolis to Cottage Grove, MN to be near her daughter, grandchildren, and the newest great-grandchildren.

She loved helping to take care of the youngest generation, and they loved her.  On 12/31/2015, she moved to Hastings, and lived in Park Ridge Senior Living.  Even during this late stage of life, Veronica was faithful in her church, her exercise, and the love for her family.  She was an inspiration for many, staying active until the end.  Her passing seems to be fitting with her life…she passed during her morning physical therapy session.  She passed while still doing something she loved.

To order memorial trees or send flowers to the family in memory of Veronica Olsen, please visit our flower store.